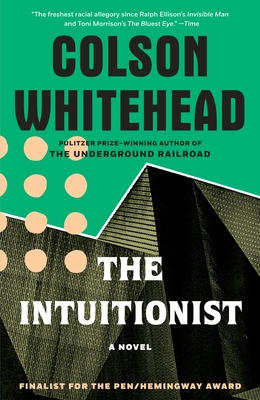 The Intuitionist: A Novel

This debut novel by the two time Pulitzer Prize-winning author of The Underground Railroad and The Nickel Boys wowed critics and readers everywhere and marked the debut of an important American writer.

It is a time of calamity in a major metropolitan city's Department of Elevator Inspectors, and Lila Mae Watson, the first black female elevator inspector in the history of the department, is at the center of it.  There are two warring factions within the department:  the Empiricists, who work by the book and dutifully check for striations on the winch cable and such; and the Intuitionists, who are simply able to enter the elevator cab in question, meditate, and intuit any defects.

Lila Mae is an Intuitionist and, it just so happens, has the highest accuracy rate in the entire department.  But when an elevator in a new city building goes into total freefall on Lila Mae's watch, chaos ensues.  It's an election year in the Elevator Guild, and the good-old-boy Empiricists would love nothing more than to assign the blame to an Intuitionist.  But Lila Mae is never wrong.

The sudden appearance of excerpts from the lost notebooks of Intuitionism's founder, James Fulton, has also caused quite a stir.  The notebooks describe Fulton's work on the "black box," a perfect elevator that could reinvent the city as radically as the first passenger elevator did when patented by Elisha Otis in the nineteenth century.  When Lila Mae goes underground to investigate the crash, she becomes involved in the search for the portions of the notebooks that are still missing and uncovers a secret that will change her life forever.

Colson Whitehead is the Pulitzer-Prize winning author of The Underground Railroad. His other works include The Noble Hustle, Zone One, Sag Harbor, The Intuitionist, John Henry Days, Apex Hides the Hurt, and one collection of essays, The Colossus of New York. A National Book Award winner and a recipient of MacArthur and Guggenheim fellowships, he lives in New York City.

Praise for The Intuitionist: A Novel

"Ingenious and starkly original...Literary reputations may not always rise and fall as predictably as elevators, bit if there's any justice in the world of fiction, Colson Whitehead's should be heaing toward the upper floors."
--The New York Times Book Review

"The most engaging literary sleuthing you'll read this year. . . . What makes the novel so extraordinary is the ways in which Whitehead plays with notions of race."
--Newsweek

"Whitehead's prose is graceful and often lyrical, and his elevator underworld is a complex, lovingly realized creation."
--The New Yorker

"The Intuitionist is the story of a love affair with the steel and stone, machinery and architecture of the city. It's not a pretty love, but a working-class passion for the stench of humanity that its heroine, Lila Mae Watson, has made her own. But as always with love there is betrayal. This extraordinary novel is the first voice in a powerful chorus to come."
--Walter Mosley