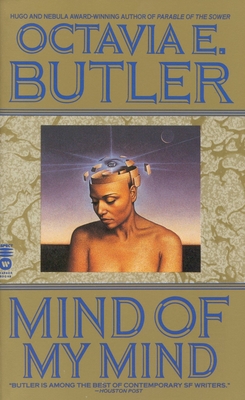 Mind of My Mind (Patternist #2)

A young woman harnesses the power of a viral mutation and challenges the ruthless man who controls her, in this brilliantly provocative novel from the award-winning author of Parable of the Sower.

Mary is a treacherous experiment. Her creator, an immortal named Doro, has molded the human race for generations, seeking out those with unusual talents like telepathy and breeding them into a new subrace of humans who obey his every command. The result is Mary: a young black woman living on the rough outskirts of Los Angeles in the 1970s, who has no idea how much power she will soon wield.

Doro knows he must handle Mary carefully or risk her ending like his previous experiments: dead, either by her own hand or Doro's. What he doesn't suspect is that Mary's maturing telepathic abilities may soon rival his own power. By linking telepaths with a viral pattern, she will create the potential to break free of his control once and for all-and shift the course of humanity.

OCTAVIA E. BUTLERwas a renowned writer who received a MacArthur "Genius" Grant and PEN West Lifetime Achievement Award for her body of work. She was the author of several award-winning novels including Parable of the Sower, which was a New York Times Notable Book of the Year, and was acclaimed for her lean prose, strong protagonists, and social observations in stories that range from the distant past to the far future. Sales of her books have increased enormously since her death as the issues she addressed in her Afrofuturistic, feminist novels and short fiction have only become more relevant. She passed away on February 24, 2006.