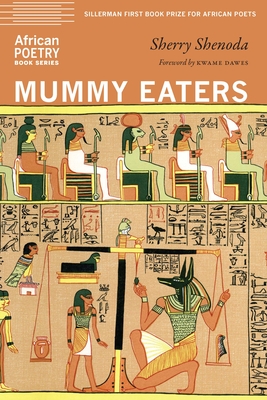 2022 Longlist for the National Book Awards

Winner of the Sillerman First Book Prize for African Poets, Sherry Shenoda’s collection Mummy Eaters follows in the footsteps of an imagined ancestor, one of the daughters of the house of Akhenaten in the Eighteenth Dynasty, Egypt. Shenoda forges an imagined path through her ancestor’s mummification and journey to the afterlife. Parallel to this exploration run the implications of colonialism on her passage.

The mythology of the ancient Egyptians was oriented toward resurrection through the preservation of the human body in mummification. Shenoda juxtaposes this reverence for the human body as sacred matter and a pathway to eternal life with the sixteenth- and seventeenth-century European fascination with ingesting Egyptian human remains as medicine and using exhumed Egyptian mummies as paper, paint, and fertilizer. Today Egyptian human remains are displayed in museums. Much of Mummy Eaters is written as a call and response, in the Coptic tradition, between the imagined ancestor and the author as descendant.

Sherry Shenoda is a Coptic poet and pediatrician, born in Cairo, living near Los Angeles. Working at the intersection of human rights and child health, she serves as a pediatrician in a nonprofit health center. She is the author of The Lightkeeper: A Novel.

“I think of this book as a book of invocations. A shimmering history of histories. A wail in a chorus of wailing and a prayer in a chorus of prayers where time is pleated and beloved people and places who have passed into death are ‘alive, there, through the aperture of grief.’ This book is a prayer for time to ‘settle an aloe on mother’s heart.’ Such poems thrum with the brilliant, meditative attention of someone who learns from every thing. See: ‘Lend me, gazelle, your fleet hooves […] / I seek the Field of Reeds, the blue lotus. / Bring the cobra. I do not fear him.’ There is such deep intelligence, tenderness, and courage everywhere here.”—Aracelis Girmay, author of The Black Maria