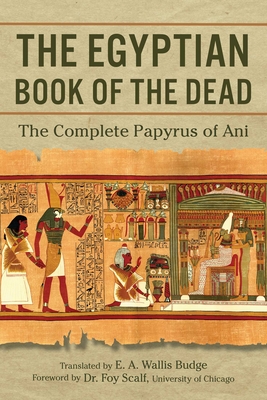 The Egyptian Book of the Dead: The Complete Papyrus of Ani

A New Edition of the Ancient Egyptian Book of the Dead, Perfect for History Buffs, Budding Archaeologists, or Mythology Enthusiasts!

The Egyptian Book of the Dead is unquestionably one of the most influential books in all history. Containing the ancient ritual to be performed for the dead with detailed instructions for the behavior of the soul in the afterlife, it served as the most important repository of religious authority for some three thousand years. Chapters were carved on the pyramids of the ancient 5th Dynasty, texts were written in papyrus, and selections were painted on mummy cases well into the Christian era. In a certain sense, it represented all history and research of Egyptian civilization.

In the year 1888, Dr. E. A. Wallis Budge, then purchasing agent for the British Museum, followed rumors he heard of a spectacular archaeological find in Upper Egypt, and found in an 18th Dynasty tomb near Luxor a perfectly preserved papyrus scroll. It was a copy of the Egyptian Book of the Dead, written around 1500 B.C. for Ani, Royal Scribe of Thebes, Overseer of the Granaries of the Lords of Abydos, and Scribe of the Offerings of the Lords of Thebes.

This Papyrus of Ani is presented here by Dr. Budge. Reproduced in full are a clear copy of the Egyptian hieroglyphs, an interlinear transliteration of their sounds (as reconstructed), a word-for-word translation, and separately a complete smooth translation. All this is preceded by an original introduction of more than 150 pages. This classic material combined with a brand-new foreword by Dr. Foy Scalf of Chicago University gives the reader has a unique opportunity to experience all the fascinating aspects of The Egyptian Book of the Dead.

Dr. E. A. Wallis Budge is known as being one of the most renowned Egyptologists in the world. After discovering the Papyrus of Ani in 1888, he became the Assistant Keeper and eventually the Keeper of Oriental Antiquities at the British Museum. Though his career was controversial, he brought many tablets, manuscripts, and other findings from his multiple trips to Egypt and the Sudan back to the museum and his dozens of books on Egyptology helped bring his findings to a wider audience. In 1920, he was knighted for his service to Egyptology and the British Museum. He died in London in 1934 at the age of seventy-seven.
Foy Scalf studied Egyptology at the University of Chicago, where he wrote a dissertation on Demotic funerary papyri from 1st–2nd century CE Egypt. His published work covers a variety of topics including Egyptian grammar, philology, Demotic texts, magic, and religion. He is a research associate and head of Research Archives at the Oriental Institute. He was awarded the Archival Innovator award from the Society of American Archivists in 2016. In 2017, he curated the Oriental Institute special exhibit Book of the Dead: Becoming God in Ancient Egypt and edited the accompanying catalog. He has regularly taught classes for the Oriental Institute Museum, the Department of Near Eastern Languages and Civilizations at the University of Chicago, as well as the School of Information Studies at Dominican University.